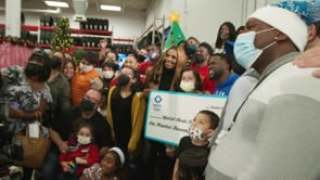 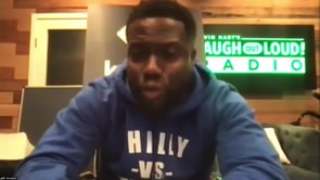 Kevin Hart, Laugh Out Loud and Sam’s Club delivering on its promise to Bring the Merry this holiday season
View Photo
Download Photo Trio rings in the season with more than $500,000 in donations

BENTONVILLE, Ark., Nov. 29, 2021 – Sam's Club continues to deliver on its promise to Bring the Merry this holiday season. Last week, Sam’s Club, Laugh Out Loud and Kevin Hart celebrated five organizations making a big difference in children’s lives by surprising them with $100,000 each through a series of virtual and in-person announcements across the country. In addition to the monetary contribution, select families and children benefiting from the organizations were also surprised to have a unique holiday wish – from laptops to karaoke machines to dollhouses – fulfilled by the trio.

One of the best things you can do for yourself is believe in other people. I’ve always had people in my life that believed in me, and I believe in the power of passing that onto others. The donations we made went to organizations that believe in the future of kids and their families. I’m proud we were able to work together to make a big impact.

Known for bringing laughs on the big screen, Hart brought smiles to many from coast-to-coast in just a few short hours. In each market, families and children were gathered for what they thought was just holiday party organized by Sam’s Club, but they were surprised to dial in to a virtual call and find Hart on the other side of the line.

Hart delivered news of the monetary donation and individual gifts on the calls, and Sam’s Club associates were on hand to deliver the items to recipients in person. Hart ended the day by surprising 10 families from the Special Needs Network at a Sam’s Club in Oxnard, Calif. with a holiday shopping spree at Sam’s Club.

"These groups have an incredible impact on the communities and families they serve," said Tony Rogers, senior vice president and chief member officer, Sam’s Club. "It’s been an honor for us to work together with Kevin and Laugh Out Loud to recognize their work with gifts that allow them to further their missions."

Earlier this month, Sam’s Club, Hart and Laugh Out Loud announced plans to team up and take the holidays "to an 11" this year. The trio share a commitment to doing good in local communities, making this charity component of the holiday campaign a natural fit.

About Sam’s Club
Sam’s Club®, a division of Walmart Inc. (NYSE: WMT), is a leading membership warehouse club offering superior products, savings and services to millions of members in nearly 600 clubs in the U.S. and Puerto Rico. Now in its 39th year, Sam’s Club continues to redefine warehouse shopping with its highly curated assortment of high-quality fresh food and Member’s Mark items, in addition to market leading technologies and services like Scan & Go, Curbside Pickup and home delivery service in select markets. To learn more about Sam’s Club, visit the Sam’s Club Newsroom, shop at samsclub.com, and interact with Sam’s Club on Twitter and Facebook.

About Laugh Out Loud
Laugh Out Loud is a comedy brand and multi-platform entertainment company dedicated to keeping the world laughing together. Founded by comedian, actor, and producer Kevin Hart, LOL delivers the best in comedic content and experiences across its multiple divisions—LOL Audio, LOL Network, LOL Studios, and LOLX. From stand-up legends to the next generation of comedic talent, LOL curates comedy’s boldest voices to produce original scripted and unscripted series, stand-up specials, radio shows and podcasts, live broadcasts, experiential activations, and more. LOL content is distributed to a diverse, global audience of more than 100 million fans across the LOL OTT Network of FAST Channel partners including Pluto, Peacock, Tubi, Roku, Xumo, Redbox, and more. LOL Audio has access to an additional 100 million listeners via partnerships with SiriusXM, Stitcher, and Pandora. Known for content such as Cold As Balls, What the Fit, Comedy in Color, Die Hart, and more, the company has amassed more than 1 billion video views across its digital platforms, and has worked with brand partners such as AT&T, Headspace, Lyft, Old Spice, P&G, Viacom, and more. Find us online at laughoutloud.com or on Facebook, Instagram, TikTok, Twitter, YouTube, and Snapchat via @lolnetwork.

Stars, Stripes and Savings: Sam’s Club is Celebrating Independence Day with an $8 Membership Offer
BENTONVILLE, Ark., June 16, 2022 — Sam’s Club, a leading membership warehouse club, is giving Americans more ways to celebrate ahead of the Fourth of July holiday by offering its Club membership for less than a fourth the everyday price, for a limited time, and offering members savings on seasonal merchandise.According to the warehouse retailer’s…